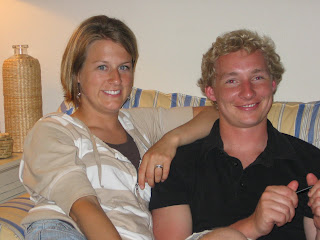 I started this blog so that friends and family could stay updated with my quad pregnancy. It's still so surreal that there really are four little lives inside me right now. For those who don't know, we were not on fertility drugs, so this occurrence was baffling to the doctors we've seen so far. All of my life I really thought I'd have twins, but never in a million years did I even think of quads. No one really does though, do they?

Here's how the pregnancy has progressed so far...I found out I was pregnant late June, and of course Dan and I were ecstatic! We had one really early miscarriage in late fall '08, so we just crossed our fingers this one would take. The doctor had told me to call in when it happened again, so I did just that. She ordered blood tests, and after those proved my HCG levels were increasing appropriately (or perhaps more than normal?), she ordered an early ultrasound at my 6 weeks mark. This showed twins with great, strong heart beats! There was another section of my uterus that the tech said "at one point had two embryos, but no heart beats now!" That just went in one ear and out the other. Anyways, another u/s a week later proved FOUR STRONG HEART

BEATS! All Dan and I could do is look at each other in disbelief.
Ever since, each u/s that we go to, we see all four of them growing just as they should. So far I've had five ultrasounds. The last two ultrasounds were extra special because we actually heard the heart beats (whereas before we saw light flickering). Plus they were bopping all over the place! The tech couldn't believe how active they are. They just might be able to keep up with Odin! 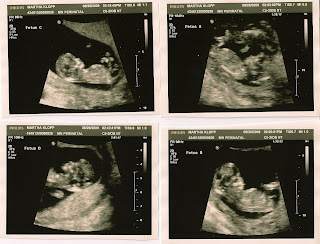 All of this may seem so exciting and happy, but having quads in itself is risky, not to mention hard on the body. We not only have to worry about that, but also two of our little ones are monoamniotic (same gestational sac), which could pose some real problems at any point in this pregnancy. If you read about it, you'll learn the dangers of cord entanglement/compression, twin-to-twin transfusion, and more. We could have the healthiest babies all throughout, and suddenly at 23 weeks or so they could just perish. The one positive aspect is that if the monos are in trouble the other two should be just fine. I think about this everyday and pray that they all stay healthy.
Plus, at the last u/s the doctor discovered two of the babies (one monoamniotic twin and one of the fraternals) have less-than-ideal cord insertions into the placenta. The cord insertion for the mono twin is worse, but both situations could result in slower growth or possibly worse. When I learned this, I really didn't ask the doctor enough questions about how likely this will have a negative effect on either baby. Next appointment I will gather more information. (Researching does no help because there are different types of insertion problems and she didn't tell me the full medical term for what I have and all the articles about it are SO medical for someone with a BA in exercise science.)

What we need are prayers for the health of me, the quads, and of course the father who has to take care of us when I can't be as mobile later on!
Posted by Martha Klopp at 12:05 PM 1 comment: Links to this post