Countdown to Christmas!... here is our Christmas card this year. 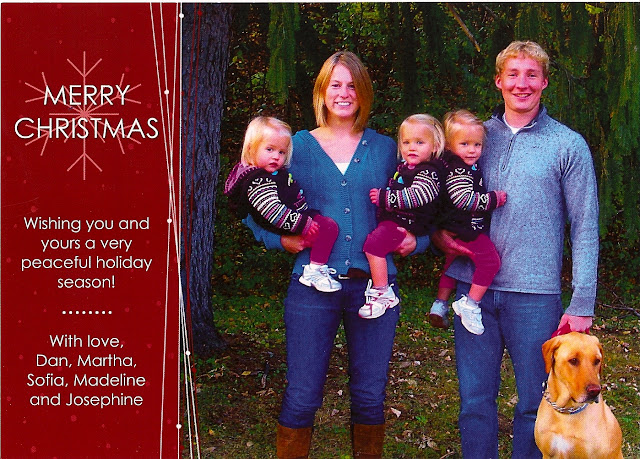 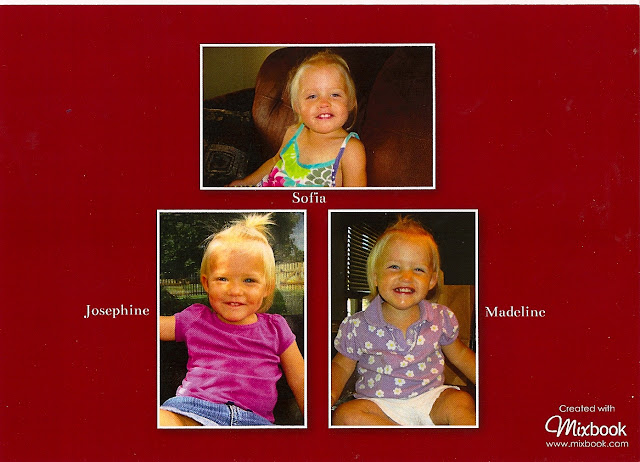 Hope everyone is having a great week leading up to Christmas! Tomorrow, Dan and I get to see some friends from college, and Saturday we head up to Duluth for the week! The girls are doing great- they have little colds but just a runny nose thing.
The two year appointment was fine. The doctor said Sofia's weight gain was getting better. She weighs 19 lbs 8 oz and is 32 inches tall. She made the growth curve for her REAL age for height (not so much her weight)! Her head is 45 percentile for her real age too (they have all been on the growth curve for their head sizes every appointment so far).
Madeline is 22 lbs 6 oz and is close to 32 inches tall (which is hard to get accurately anyway- I think they're the same height).
Josie is 21 lbs 2 oz and also close to 32 inches tall. Both Josie and Madeline had similar sized heads to Sofia. Nice big brains! The doctor thought the girls were developmentally on track- similar to other 2 year olds. We don't have to return for another year. (Let's not come back for illnesses, OK, girls?)

Have a very Merry Christmas/ Happy Holidays!
Posted by Martha Klopp at 10:12 PM 3 comments: Links to this post

I had the intention to write a post closer to their birthday, but this is the best I did!   What a bittersweet time of the year. Two years ago today, James was still alive, though at this point we were getting to be certain he was brain dead. Their actual birthday was a happy day, but we knew it was just too early. 27 weeks and 1 day...definitely not even close to my hopeful (maybe lofty?) goal of 32 weeks.
On the other hand, look at our three healthy girls! We couldn't be luckier in how they turned out. In early winter of 2009 we weren't sure if Sofia would pull through her sudden illness/surgery, whether Madeline would resolve her unexplained blood gas issues or even whether, late in the NICU stay, Josie would be sent home with a trach. Now, they are pretty much like any other 2 year old! (Maybe too much like a 2 year old lately!)
We had some family over for their birthday party this past Saturday. It was more low key than last year (when they had a party on top of a reaffirmation of baptism). They got a lot of fun presents and had fun opening them.  Their BIG birthday/Christmas present they couldn't open- both sets of grandparents chipped in to get them a sweet play set. Of course, we also had cake at the party. When we sang to the three girls, Sofia started bawling! I felt bad but I still got a couple pics. All three of them get pretty hesitant around a crowd, which I am sure is common (but I'm more introverted than extroverted so I could have passed on those genes).

Here are some random 2 year stats (besides weight/height- I'll give those next week after their 2 year appointment)...

Sofia
favorite food- I would have to say blueberries, but she definitely will eat all the lasagna or scrambled eggs you put in front of her. She would mostly prefer fruit to anything else.

favorite toy- stuffed animals (especially dogs), dolls, books, the doll stroller and grocery cart. She currently has no real attachment to anything- she likes to sleep with something but if we don't have a particular thing she doesn't freak out.
tidbits- loves wearing shoes (but NOT the ones I want her to wear), picking out clothes (and micromanaging her sisters' clothes too), loves Elmo, has been fighting battles with mom such as where she gets to eat a meal (trying to refuse the high chair, but I'm winning that battle) Sofia can hang holding onto a bar the longest- I discovered this at the jungle gym at ECFE (of course I'd like her to weigh more and not be so great at it!!!)

Madeline
favorite food- cottage cheese, sweets (like the rare occasion I give cookies, etc), lasagna
favorite toy- still has to have her blankie ("kinki"), anything to climb on, books, dolls, the doll stroller and grocery cart.
tidbits- she loves fighting battles too (where to sit and when she doesn't want to get clothes on).... she is acquiring the love of shoes also, has some extreme oppositions such as hitting and pulling her own hair. Still the biggest daddy's girl and recently was soothed at bedtime when Dan was out of town by me telling her "Daddy says goodnight, I love you".

Josie
favorite food- mac and cheese, vegetables, all fruit...basically the least picky but who knows if that will change (AND she doesn't battle over where to sit since it freaks her out to sit on the stool- but we had a recent battle of removing her cat).
favorite toy- blankie ("kinki"), her cat stuffed animal, other stuffed animals, puzzles, the new fridge farm toy, books, stroller and grocery cart.
tidbits- Making the quickest strides verbally and possibly cognitively (she usually has the best patience so that helps). We're worried she's going to start getting deformed because she constantly has her cat tucked in her arm- she's always trying to do things with mostly one arm (we're not actually worried!)


Here are some more random pictures. Sofia and Josie had a long hugging session today that I have to include. I also have to add a couple videos I sent to Dan JUST in case he's missing them a little bit. ;)


Dan has been gone for work this whole week, but amazingly it has gone by pretty quickly. It helped that I got to go to the play "Cinderella" on Tuesday night with a bunch of the ladies in Dan's family. Thanks, Pete, Steve, and Dave for babysitting! I know it was the first diaper change for a couple of you!!! Lara and I were impressed with a job well done.
This weekend is the last weekend before Christmas- crazy! One fun thing planned is the family Christmas party at a nature center close by where they can meet Santa. After all the holidays, we get to anticipate the NICU followup evaluation. We better study up, girls! Have a nice weekend, everyone.

Posted by Martha Klopp at 3:03 PM 2 comments: Links to this post