I have to say, Happy Birthday, Grandma (my mom)!!
Hello everyone! The Klopp household is still bustling and having fun!! Can you believe the girls will be 14 months on February 9th? We are getting close to the anniversary of coming home from the hospital, too! The girls are great- nothing to really report, but here's what I came up with...
Sofia is getting at least another tooth on top of the one she already has! She is practicing standing up without pulling on anything and still takes a step once in awhile. I don't know how long this stage is until they finally walk, but it's fun to watch!
Madeline is getting her first tooth finally! She stands up without pulling up like Sofia. It's the funniest thing- they usually stand up during "naked baby time" at night before their last bottle, but not as often during the day. "Naked baby time" is notoriously HYPER time, I really should video tape it- it's so entertaining.
Josephine has been extra pleasant and may be getting another tooth as well (so teething is not a huge deal around here). She hasn't tried to stand up yet but that's the timid side of her. She is probably just too happy crawling around.
I love, love, LOVE this video of Josie babbling. What do you think she's trying to tell me?? Isn't her voice impressive too considering she has/had a paralyzed vocal cord?  What a cutie pie! Have a great week!

A couple days ago in the early morning hours, my Grandma Rachel passed away. This wasn't a shock or unexpected, but that doesn't make it any less sad. She was a very sweet woman who thought of others all the time. She was a fantastic cook and baker, plus she was talented at sewing and knitting. She loved her family and was really grateful that she got to meet her great-granddaughters. I am so grateful that I brought the girls to meet her. At the time I wasn't sure how much longer she would be around, but I thought I had some time. I'm glad we went when we did because I would have regretted it if we hadn't made the trip. I'm also grateful my last words to her in person were "Love you, Grandma!" She had the most contagious laugh you've ever heard, and her stories never got old. That is how I will remember her! 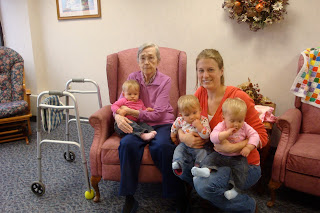 This weekend we will be going to Willmar for her funeral. Miss you, Grandma!
Posted by Martha Klopp at 1:52 PM 1 comment: Links to this post

We Have a Daredevil!

I hope everyone's surviving winter! I think all my relatives out east are getting bombarded by some big snow storms today. We feel your pain! Luckily, Minnesota has been quiet this week- on the warm side actually (in the teens).
Our Madeline is proving herself to be a little daredevil lately. I had to add a couple of pics and a movie to show you what she's been up to. Right after I took the picture and movie with her on the purple car, she had a huge cry fest. Why? Not because she fell, but because I took her off and she was having too much fun! She makes me a little nervous! We've also noticed Madeline is getting in a lot more cranky moods and it's probably because of an impending tooth. We're waiting, Maddie!!


Sorry the movie is a little dark...but you get the gist.
Josephine is such a sweetheart lately. With her tooth halfway up she is definitely a lot happier than before the tooth. Josie is the opposite of Madeline- she is a little bit of a scaredy cat. When we put her up on the couch to look out the window, she grabs on to the couch like she's holding on to dear life. She just needs time to get used to new things. She also is a lot more hesitant to stand alone too.
Sofia is still a bit of a bully- which it's not too fair to say because she obviously doesn't have bad intentions. I wonder if she'll always be like that- a big personality trapped in a tiny body. She's getting better with not spitting out food. We just noticed this past weekend that she is sprouting a little tooth! It's an upper tooth, though (unlike Josie's)!I guess it's not as common to start with an upper tooth, but who says any of these girls are common?
This is dark- but it's more for the sound, so it doesn't matter. It's of Sofia during her last bottle of the day- usually when all the girls are basically sleep feeding!
Speaking of meal times, it's fun concocting up new meals for them. The other night I pureed pork, brown rice, and green beans...but it was NOT a hit! So what do I do? Add banana. I know, it's probably not good to start a habit like this, but I will just keep introducing the offending foods until they don't need a banana to go along with it. At least I can get them to eat it one way or another.
So I've been thinking to myself how comfortable I am with our routine- and how "easy" it is to take care of them (I don't really mean easy because it's not like I'm taking them out grocery shopping or flying with them), but I'm realizing that there will be changes coming up. Right now, I still puree a majority of their food and they still take 3 bottles a day. I'm scared for the day that they feed themselves their whole meal- how do you know they'll eat enough? Not to mention the mess! We've also been working on sippy cups but they do not drink much out of them yet. They understand how to drink from them but they have never taken a substantial amount. By March I would like to be done with bottles but it's hard to know whether they'll drink enough. Also, it's hard to know when they'll be ready for one long nap a day instead of two. I'm shooting to go to one nap by March, which is their adjusted age of one year. So confusing. I like the way things are right now! I guess,  in past stages I had the same sort of worries about stuff I figured out since. It just works out!
Posted by Martha Klopp at 1:56 PM 2 comments: Links to this post

I hope everyone had a good Christmas and New Year's.  It's been a while since I last posted! We were in Duluth for about a week. We split up time between my family and Dan's family. For Christmas Eve, we went to the church Dan's family goes to. The girls made it 20-30 minutes until they were too restless, so we took them out to the reception area. They were hilarious out there- hyper and loud- we were afraid the whole congregation would hear them! They had so much energy built up. There's a video below, but it doesn't show the extent of their mood! It was fun to be around family  and everyone got fun presents. This feels like their first Christmas even though it wasn't (they were in the NICU last year)!
After Duluth, we had a relaxing weekend to ourselves to decompress. On New Year's Eve, Dan and I surprisingly stayed up until midnight! I bought Dan a Wii for Christmas so we had fun playing Mario and toasting with champagne. It was perfect. Having Dan home from work was great but now it's back to reality. Here's a couple of updates for each girl.
Sofia... well, her eating is our latest battle! She is getting picky and actually learned how to spit out food. At first she did it with foods she wasn't familiar with, then she started doing it with food I know she likes! The last couple of days have gotten better but it was really frustrating. It was especially maddening because she is smaller- every calorie counts! Besides that, she is fun and cute like always. We notice that she is probably the biggest bully of them all. She does not back down and frequently wrestles with her two sisters (instigating it usually). Her size is not holding her back!
Madeline... a week and a half ago she took a couple of steps! She was standing in place and I held out my arms and she took two small steps to me. Dan said she did it again when I wasn't there but I'm not sure if these little steps "count". She is definitely more of a risk taker than the others...before long they'll be running all over the place.
Josephine... I wasn't lying last post- Josie did get a tooth!!!! It finally cut through the gums. Woohoo! We were starting to wonder whether there would be NO teeth! The great part about this is we didn't notice her being especially cranky- maybe a little bit here and there, but nothing we can pinpoint as "oh, that was teething". We would be just too lucky if all the teeth here on out are this easy. Knock on wood!
One more tidbit about Josie and Maddie is that they are rock stars at climbing the stairs. We live in a one level so the girls aren't used to stairs, but Josie and Maddie quickly learned to climb the whole staircase at their grandparents' house. Because of this new ability, we had to watch them that much closer! Sofia just looks up the staircase and whimpers- she hasn't tried really, but I'm sure she could too.

This is DURING the Christmas Eve service...oops! The "ahhhhh" they do is the new thing they do all the time. One baby starts and the others chime in.

Posted by Martha Klopp at 2:33 PM 3 comments: Links to this post