I used a website that tests DNA to order a kit! When it comes in the mail I will have to get cheek swabs and mail it back to the company. Within a couple of weeks we should know if Sofia is identical!

We know that Madeline and Josephine are identical because they were mono-amniotic and mono-chorionic (same placenta), but we have assumed that Sofia is fraternal. The thing is, we don't know for sure either way! To me, the girls don't look too much alike, but Madeline and Josie don't look any more alike than Sofia. Actually, as they grow older they look more alike than when they were younger. Some people swear Sofia is identical, but others pick out Sofia right away because she has a different look. So.... what do you think! I added a poll, so tell me what you think! Hopefully we'll find out before too long! (I haven't even gotten the kit in the mail yet so I know the suspense will kill me!)
Posted by Martha Klopp at 11:16 AM 7 comments: Links to this post

I haven't updated for awhile! The girls and life are great. The daily routine seems to get easier than before. In fact, I just put Sofia and Madeline in their cribs fully awake and told them it was nap and they both fell asleep in just a couple of minutes with no crying! Josie fell asleep in the swing- might have to stop relying on the swing soon, though.

I was in Duluth for more than a week with the girls. This past weekend we were at the Peterson cabin on Long Lake to celebrate Great-grandma Peterson's 75 birthday. It was fun to spend time with the family! Lara, Charlie, Dane, and Peter made another long car trip out to Minnesota from Detroit so that made it extra special! Little Big Peter is almost 5 months and doing so much more now! Dane is as cute as ever and a ball of energy! I wish I took pics at the cabin with the cousins but next time.

Sofia made the switch to full time "real" crawling! Goodbye army crawling! Not sure if I wrote this before, but she is the most eager to eat baby food out of all the girls. She looks like a little bird opening her mouth for the spoon. So cute! Sofia may have the best balance right now- sometimes she can stand alone for a couple seconds! For all we know she could walk first!
Madeline is the most likely to fall asleep by herself (no rocking). It makes life easier when I'm by myself at home. (Sofia is doing this more and more too.)
Josie is still crawling all over the place but now she has caught up to her sisters in the babbling department. It's so cute to watch her practice! They just can't get enough of their own voices making the new sounds. Josie also has a new facial expression where she crinkles up her nose and smiles- it is so stinking adorable! I'll have to get a pic of it when I can.

The girls as a whole are just so much fun (no lie!) They love to travel in packs and it's not uncommon for all three to crawl on me at once! Sometimes it's hard to get up off the floor with all the clingers! You can tell they like to be together rather than alone. I'm already seeing the perks of having multiples: keeping each other entertained!

I can't wait to put up pictures of the girls in their Halloween costumes. You won't believe the cuteness! It'll be fun to walk around the neighborhood with their costumes on.

My brother Jon came in from LA last night so he'll be coming over with my parents for the next couple of days! Woo-hoo! Hope everyone has a good week!

Posted by Martha Klopp at 10:02 AM No comments: Links to this post

We were invited to a Memorial Service for people who lost babies at the Children's Hospital. We attended and brought the girls this past Saturday. It was such a beautiful day and a beautiful service. Each family got to say the name of the baby being remembered and place a candle on the front table of the service. The music was sweet and heartfelt. It was all very emotional, not only because we miss James, but to look around the room at all the other parents and families who lost a baby. Everyone in the room had been through and are going through the same awful experience.

After the service, everyone silently walked to a huge staircase outside of the hospital. I used to work at Children's Hospital in the Exercise Medicine Clinic and I used to bring patients to this staircase for workouts! Anyways, each family got one dove for each baby they were remembering. Dan took the dove and released it when it was time. It was so neat to watch all the doves fly off at once. They flew around the area for a couple of minutes before disappearing. I'm so glad we went!


It's been a busy household this past week. The girls are all over the place lately! Today Sofia weighed 14 lbs 2 ounces. She is starting to "real" crawl! Madeline's new task is babbling just like Sofia has been doing. She weighs 16 lbs 1 ounce. Josie has been sleeping better (yay!) and keeps us on our toes with her exploring! She weighs 15 lbs 1 ounce. All of them pull up to standing... it is so funny to walk in the nursery with all three standing and giggling at each other. They can really entertain each other.

We got a new (used) Runabout stroller! It is super easy to push compared to our other one. I won't be getting as good of a workout though...


I hope everyone has a great week. This Thursday I get to go to another Moms of Multiples meeting and this weekend we plan on going to Dan's family's cabin. All for now!

Posted by Martha Klopp at 8:47 PM 3 comments: Links to this post

We Are Getting BIG!

In less than a week, the babies will be TEN months old! (So, 7 months adjusted.) Duluth was a good time and Dan was successful hunting. The girls and I went on a lot of walks with my parents- the lake walk and around the neighborhood. The weather was beautiful and so were the leaves. Who doesn't love fall colors?  Look at this group shot after a walk- they are looking eerily alike lately, especially with those hats on (thanks again, Amy, the hats are so pretty)! OK, guess who is who below (no fair if you know based on color choices!) 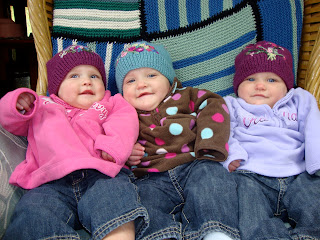 Dan demonstrates holding all three...this is right before our evening walk in the heart of witching hour. (They look happy to be held though!) 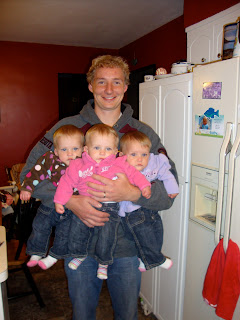 The girls are everywhere now. They crawl on each other, try to get Odin's bone, and crawl to come find me when I leave the room. Busy bodies! Below is the baby chaos with Odin. (Madeline is crawling on Josie, and Sofia is looking at the camera.) 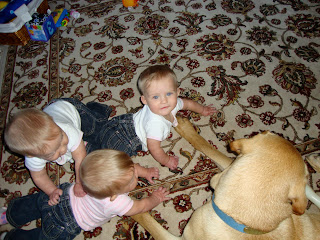 The girls are just in awe of Odin. They like to pull on his fur, feel his paws, and watch his every move. He is beyond patient but obviously we supervise. The main problem is sometimes he knocks one over by accident. We try to prevent that as much as possible. 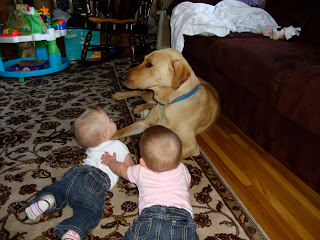 Madeline is getting better at crawling on all fours and she pulls herself up to at least a half-standing position. If something is at the perfect height for her, she stands all the way up. In this picture she is blowing raspberries, one of her new favorite sounds. 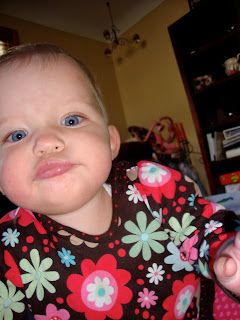 Sofia is starting to creep a lot! Once she realized she could army crawl, she learned pretty fast! She has a slightly different style than the other two. Madeline and Josie use one arm more than the other, but Sofia uses both. She also figured out how to get in the sitting position by herself. Yay! Sofia seems to be taking off now in the physical department. Sofia is coming to find Dan and I in the kitchen below. 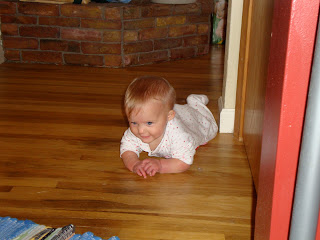 Josie is as cute as can be and can get in the best mood when she wants to! She makes silly sounds and loves to get in her laughing fits. She made the "witching" hour more bearable last night by staying pleasant, but she kept us up last night again. Josie had been doing better the last couple weeks EXCEPT the last two nights. Here she is below, looking so pretty! 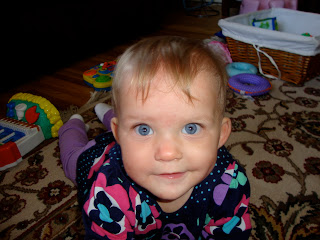 Even as a mother of three girls, I'm not really into the girly-girl things like princess themes and big bows, but I put this cute barrette in Sofia's hair just for fun. I have to admit, it looked so adorable on her! 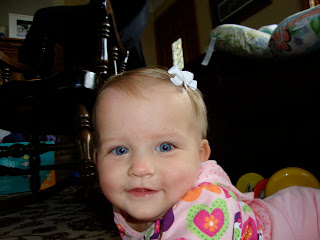 But then I realized that there's a reason why I won't be really using them for a while still- Madeline spotted it and had to have it! The barrette lasted under five minutes. Watching multiples is hysterical and very unique! 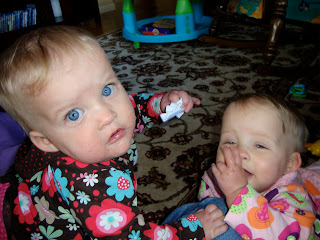 Here's a picture of Josie after she pulled herself on my lap. 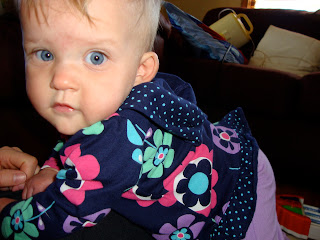 I just thought I'd add a video to show what Sofia is like when she's giddy. Too cute!

On a more serious note, I have been thinking a lot about the upcoming winter. I know I've said this before, but our girls are very vulnerable to illnesses even though they look incredibly healthy. I was just talking to a triplet mom of 27 weekers on a forum and she told me how one of her girls got pneumonia last Thanksgiving (over a year old). Her girl had to be hospitalized for three days, one of which she was on a vent. This girl was otherwise very healthy. I do not want this happening to one of my girls! I am terrified but we will basically quarantine them (like the doctors have been recommending anyway). Because of this reminder, I also made up my mind that I need to keep up the pumping at least until Feb/March to give them the best chance to avoid sickness. Here's to new-found motivation! (I needed it!) Everyone remember to be careful when you're sick with any baby! I know most of you need no reminder :)  .

Too bad tomorrow is Monday, but have the best work week you can! Thanks for reading!

Posted by Martha Klopp at 1:26 PM 2 comments: Links to this post