Hey all! This summer is flying by and has been busy and so much fun. Earlier this summer, I participated in the much anticipated Garry Bjorklund Half-Marathon (it's a part of the Grandma's race weekend). My brother Ben and several friends ran the race, but it was so crowded I didn't even see everyone. I accomplished both my conservative (under 1:40) and high-reaching (under 1:35)  goals with a time of 1:33. Overall, I felt really even-paced and strong. By the end I was pretty wiped out, so I knew I did the best I could do! The last couple miles I felt like my calves were going to cramp at any moment so I just tried to maintain my pace instead of pushing it in. The girls ran their first race the Friday before my race at the Whipper Snapper races. I had to hold Josie's hand, but it seemed like they had fun! Since then, I have done two more 5ks including the "Esprit de She". The race was well done and I plan to come back next year if I can! It's a women's only race and two glasses of wine, a turkey burger and salad, a cute singlet, etc were all included in the fee. I took 3rd place out of more than 2000 women. They gave the top 3 runners flowers and a gift basket full of fun goodies like a water bottle, cleaning spray, shampoo/conditioner, head band, etc. I haven't broken 20 minutes, which is my goal. I am signed up for the Monster Dash half-marathon in October, but I'm sure I'll squeeze in another race or two before that. Early August I officially start my half-marathon training plan again- uftda! I hope I can train more this time, as my IT band prevented me from doing that many miles. (I only ran 3 days a week in preparation for Garry Bjorklund.) This blog is rarely about my activities, so I know you're dying to hear about what the kids have been up to! :)

The kids and I stayed in Duluth after Grandma's Marathon weekend for a whole week because Dan was traveling to Seattle for work again. The girls went to Vacation Bible School with their cousins Dane and Peter. Their aunt Lara taught their age-group so that was great for the girls! I stayed two of the days, but I think they do better (participate a little more) when I'm not there. We also spent time at Island Lake, where Dan's parents are building a new home. It's a beautiful timber frame and basically everything is custom how they want! It's really coming along since this past weekend. It may be ready to move in for them this fall sometime.


We spent July 4th up at Long Lake again, where we enjoyed swimming, fireworks, and boat rides. It was really relaxing (as much as it can be with kids) and the girls even went on their first tubing ride! We are so lucky that they get along so well with Dane and Peter. Will tries to tag along too but there's only so much he can do as a toddler.


Andy and Aimee visited when we got back from up north. They came prepared with fun activities for the girls. They are planning another Minnesota trip around the same time my brother Jon will be around too. Langager family reunion!

I also brought the kids up to Duluth during the week to see my good friend Leah and her three kids. The girls always take a long to warm up to other kids, but once they did they had a lot of fun together! Will was just getting over an ear infections, so he was clingy the whole time. It was so fun to see Luke, though, because they change so much at that age! We were able to squeeze in another play date this past Sunday when we were in town again. Will was himself this time.

We are planning to be at my parent's cabin on Lake Ojibway soon but our plans aren't solidified yet. We love going up north to cabins and Duluth, but once in awhile we try to stay in town too. Hope everyone is having fun and beating the heat! When the kids wake up, we're heading to somewhere with water! I had a fun photo shoot with my girls and frogs. I just love the combination of girly dresses and frogs!

Until next time... I know I'll need to update after Lake Ojibway!

Posted by Martha Klopp at 2:50 PM No comments: Links to this post

I need to split up the updates since it's been so long! It's been over a month since the last entry and so much has been happening. Summer is so busy! We've had Duluth trips, cabin trips, and once in awhile a weekend at home. I took Will in last week for his 18 month check-up. It was good timing for the appointment because he started a fever the night before and was still feeling crummy that morning. It turned out he had a right ear infection! I think it was his first as far as I remember. It was sad because he was so lethargic and pathetic at his appointment and the pediatrician felt so badly for him! Because he was sick, we put off the vaccines, so we will be going in soon.

Will measured 31st percentile for both height and weight. This was a relief to me, because his height percentiles kept getting lower and lower at each previous appointments. He somehow had a growth spurt these last three months. His weight was 23 lbs and he was 32 inches tall. His head is still big at 87th percentile. No wonder it's hard to get shirts on!

Will has been having a language explosion. He knows a lot of words and strings the occasional two words together (such as "Mom go?") There are unfortunate words in the mix like "no" and "mine", which he definitely learned from his sisters. He's a fantastic sleeper, but I still don't think he needs as much sleep as his sisters needed at his age. He loves balls and can catch a really slow throw (where he catches it against his chest).

Will Likes:
*trucks, buses, trains, cars- anything with wheels, I guess.
*balls
*SWEETS- and he now knows juice and asks for it a lot
*lasagna and pizza
*Sunbutter (peanut butter replacement made out of sunflower seeds)
*his blankie - wants it for sleep and when he's tired or sad
*Daddy!
*his aunts, uncles, and grandparents! (and his cousins and sisters too)
*dogs- Odin and Walle (Lara and Charlie's new puppy)

Will Dislikes
*most vegetables still- but I keep trying!
*having to share Mom when he needs a cuddle
*putting on his cream or steroid ointment for eczema :(

Overall, he's such a sweet guy! We are seeing the drama of the two year old starting to creep out but this time we only have ONE going through it. Piece of cake, right? Right?? Well, we'll see.

Stay tuned for more updates! Continue enjoying the summer- it's going by way too quickly already. Today in the cities we are experience a fall type of day- very unseasonable for July, so it's a reminder to soak up the heat while we can! Here are some favorites from his mini 18 month photo shoot: 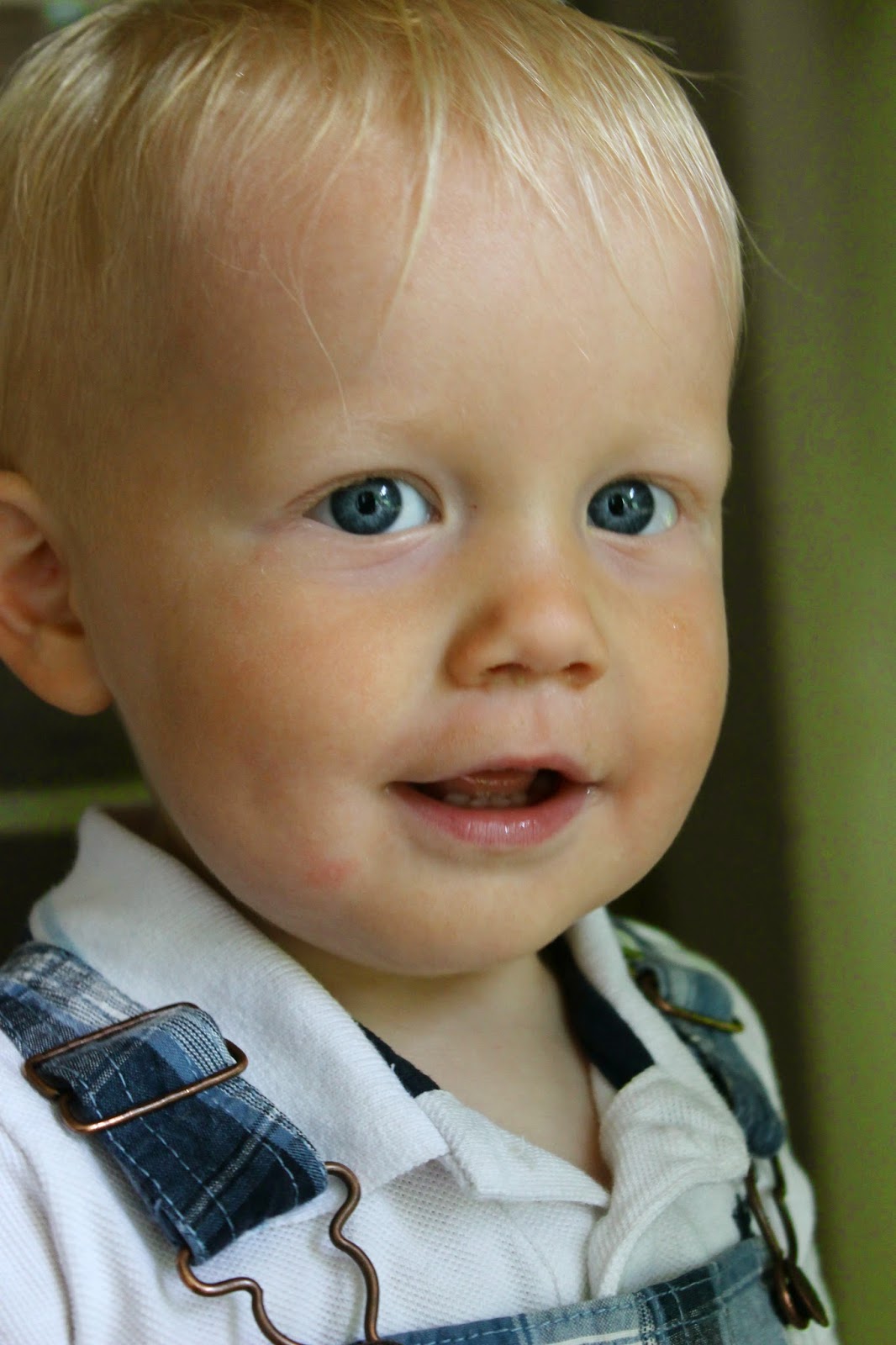 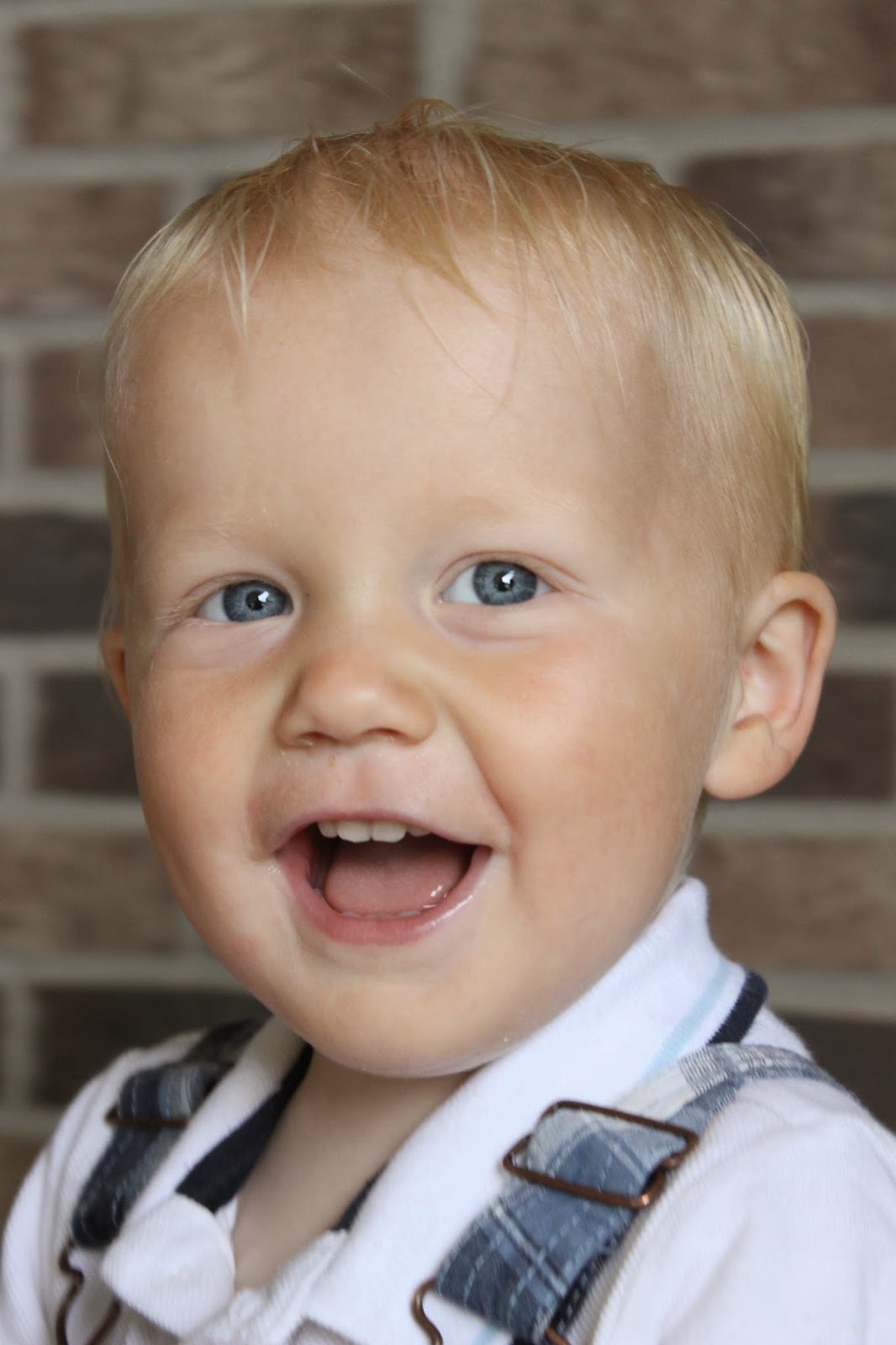 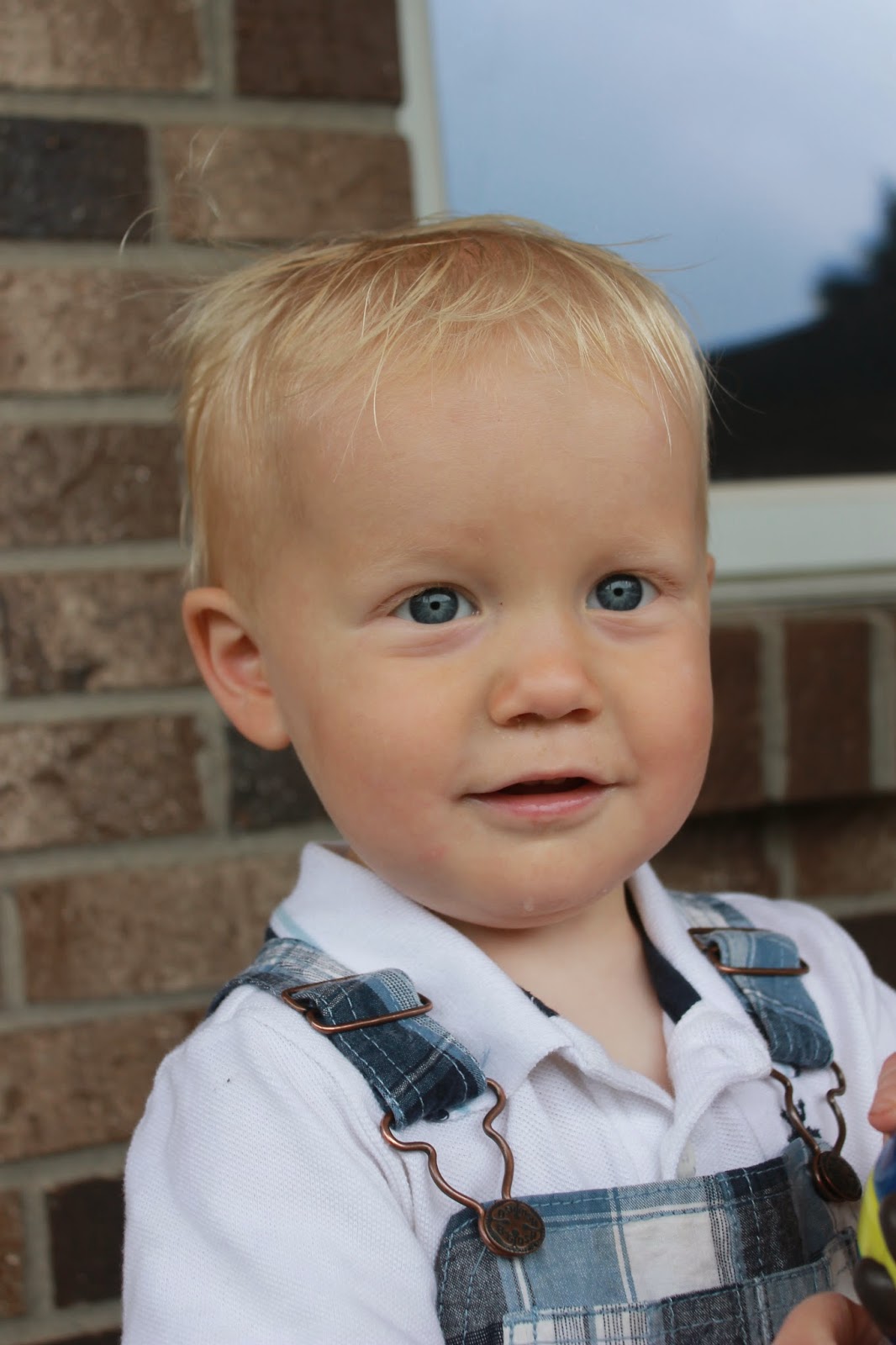 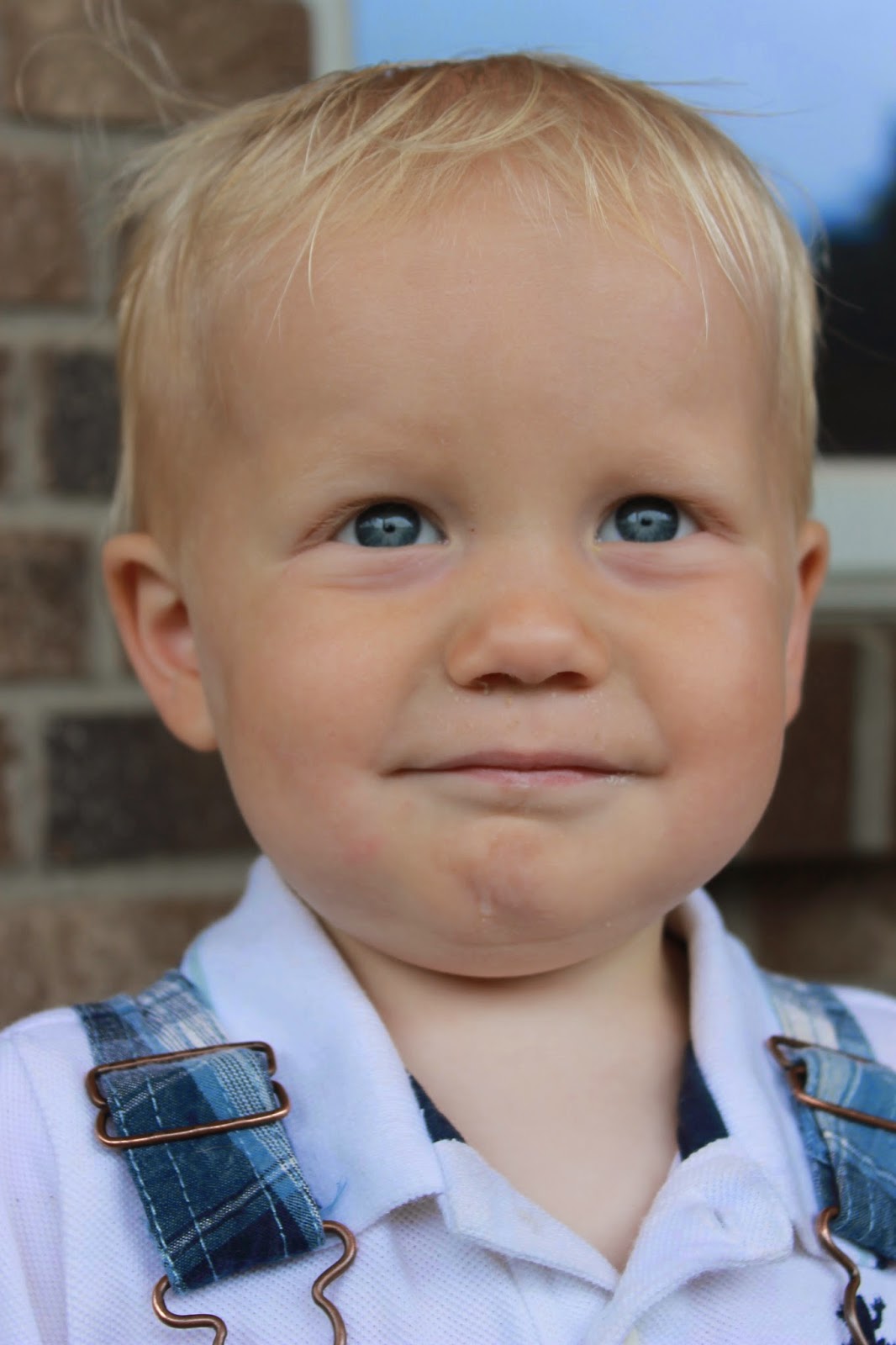 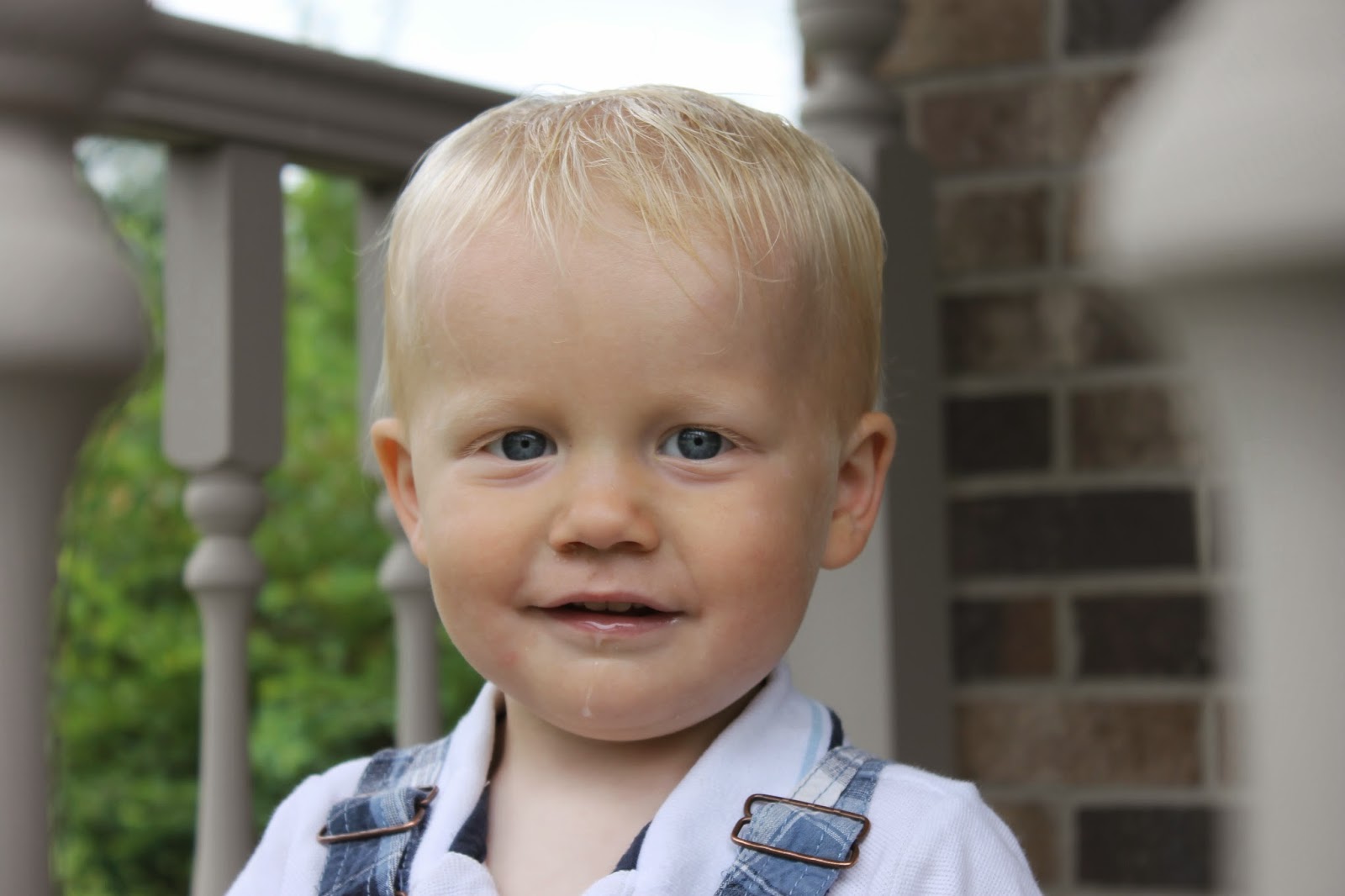 Posted by Martha Klopp at 1:52 PM No comments: Links to this post