Well, here we are in Duluth again! Dan had the opportunity for a work hunting weekend up north so I decided the girls and I should go to Duluth for a visit. Duluth in the fall is my favorite- if we can get rid of this unpleasant weather! Minnesota has been getting hit with torrential rains and wind but hopefully it's tapering off.

Dan just had his 27th birthday this past Tuesday! Dan's aunts Mary and Susie and cousin Steve all babysat for us, so a big thank you!  It was actually a very good game- the Twins clinched the Central Division after the White Sox lost (a lot of people stayed to watch the White Sox game on the screen at Target Field but it was too late for us!) I attempted to make Dan a chocolate cake from scratch but royally screwed it up... One of the sections got stuck in the pan and broke, so it was NOT pretty! (It was still tasty I have to say.)

The girls are definitely acting older and doing even more. One of the most exciting milestones Madeline is working on is holding her own bottle! I can't wait until she does it full-time! Josie and Maddie are both army crawling all over the place, plus working on "real crawling". When we lay on the floor, all three love to crawl all over us. Maddie and Josie are able to pull themselves up to standing (using us to push up from). Sofia can pull herself up if she grabs onto our hands and is showing a little more interest to start army crawling. She is still jabbering away, though. We are hearing "dadada" and some other sounds I can't really discern.

(Disclaimer: Blogger changed how to format the posts and I have no idea how to work it now so below might look like a total mess until I figure it out. I thought I was good at this stuff! If you use blogger and know the trick let me know.)

Video of Madeline and Josie exploring the house... Baby proofing here we come!
Posted by Martha Klopp at 10:27 AM No comments: Links to this post

I finally joined a Mothers of Multiples club last week. I was meaning to do it since I was pregnant but didn't get around to it until now. I'm very glad I did- it was interesting to meet other moms of multiples and a chance to get out of the house. Most of the other families are twins, but there were a couple with triplets too. The club meets about once a month with differing themes (speakers, spa nights, etc). The leaders hosted a picnic in a park near our house this past Sunday and we actually made it there! We were the only ones with babies (which was fun but it would've been nice to meet future playmates).

The girls had their 9 month appointment yesterday! They are looking as healthy as ever! Sofia weighed 13 lbs 8 oz and was 24 3/4 inches. She's still the little peanut. She's small even for her adjusted age. Besides that, Sofia is starting to babble a little more. I am making out some vowel-consonant combos from her- the first of the group. For awhile, the girls' cries sometimes sound like "mamamamama", but I never counted that. Sofia still isn't scooting, so she deserves to be ahead in the verbal department. 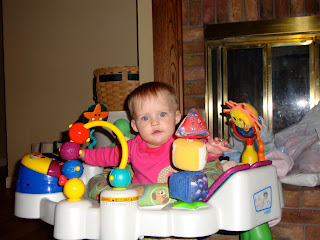 Josephine weighed in at 14 lbs 10 oz and she was 24 inches. The doctor was very pleased with the healing of her G tube site. Josie hit a milestone last week: she got into the sitting position by herself! She did it the day after they turned 9 months and she's improving every day. She is still getting up during the night, and her sisters have joined her. Sadly, we haven't had an uninterrupted night in a while. Lately, I haven't been up for too long at a time, which is an improvement. I admit, Josie came in our bed at 5 am but it's so nice to cuddle! 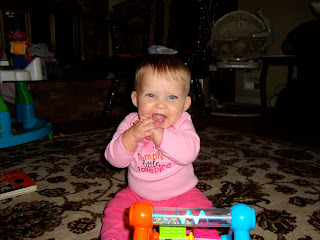 Madeline weighed a hefty 15 lbs 6 oz and was 24 5/8" long. He thought all the babies were strong and progressing impressively in development. He said if he didn't know them and had to guess how old they were he'd think they were 7 months old (of course their size would throw him off really). Madeline isn't getting to the sitting position on her own, but she is getting so much closer to crawling. It's gotta be in the next couple of weeks! The other day when Dan and I were in the kitchen for a minute, we looked around the corner and Madeline was making her way in from the living room trying to get to us! 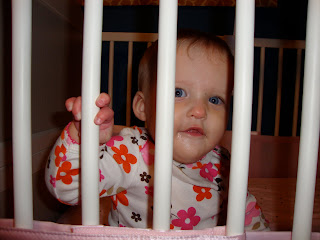 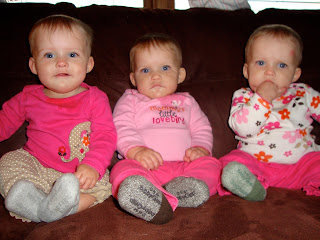 We're still working on solids- trying out foods that have more texture. I made my own green beans and apparently the taste was bad or the texture was too coarse, but it was not well received! Since then, they actually have started to like it. Still, I have to include this instant classic video....(please, please excuse Madeline's PJs- she got her arm out and we didn't bother to fix it!)

I can't believe how quickly they are getting to be BIG babies who actually do stuff. I remember when we could basically leave them on boppies, leave the room, and they would be in the same position when we returned. Crazy! Anyways, I hope everyone is having a great week! Thanks for reading!
Posted by Martha Klopp at 8:41 PM No comments: Links to this post

I was just in the kitchen doing something and I heard giggles from the other room. I had to peek around the corner with my camera so they didn't see me, but I caught Sofia and Maddie having fun together! This is what I love about multiples!

Posted by Martha Klopp at 3:55 PM 3 comments: Links to this post

Can it be? Where has the summer gone- it's already Labor Day! It's also weird to think that I've already had the blog for over a year! I am in love with fall so I'm happy about it. It brings me back to cross country running- both high school and college. Duluth, especially, has the best falls. I hope this fall here in the Twin Cities isn't like last year, when it was too warm, then too cold- no in-between. Anyways, it's fun to see all the fall sports starting up.

Did any of you see this story about the premature baby who was pronounced dead, only to end up surviving thanks to mother's touch? The mom gave birth to twins- one boy and one girl- at 27 weeks and the doctors believed the boy wouldn't make it. This story really hit home because I was a big believer in kangaroo care.

Madeline and Josie love to get up on hands and knees and rock back and forth. Madeline, especially, gets really into it and goes pretty fast! It's so funny to watch! I hope Sofia does it soon so we can get all three doing it on video.

We're still working on Josie's sleeping habits. Almost every night this past week she has gotten up in the middle of the night and is really hard to put back. Two nights in a row it was at 5 or 6 so we just brought her in bed with us and she went back to sleep. We're not starting any bad habits, are we!? It's difficult to teach a baby to self-soothe, not to mention when there are two sleeping babies in the same room. Oh, what to do.

Right now, we're working on a new feeding schedule. I know it is cliché, but where is the owner's manual? It's hard to figure out schedules that will work for all three. Once they reliably eat more solids it will be easier (knock on wood).

I should mention, we had a great weekend a week ago in Duluth! Lara, Charlie, Dane, and Peter came from Detroit so we had quality cousin time. Sadly, I didn't take any pictures, but hopefully I will get some from other people. 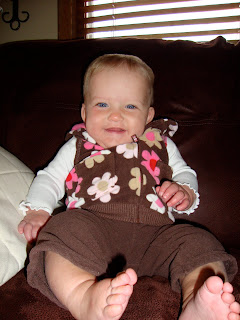 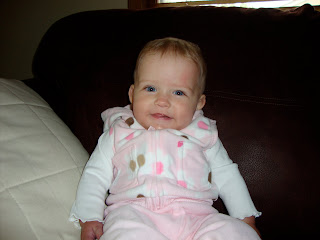 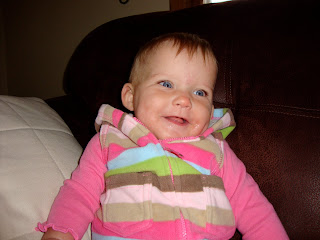 Group photo (Sofia, Maddie, Josie). I was excited to break out the fall outfits! (They are from the spring and barely fit) 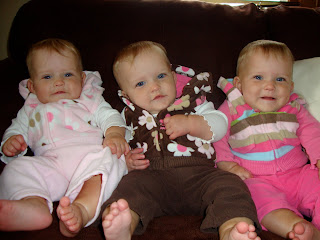 Madeline crawling over a boppy to steal Sofia's toy. 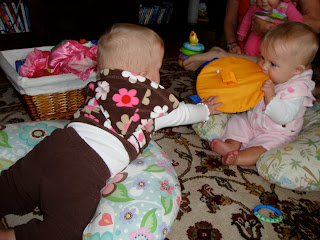 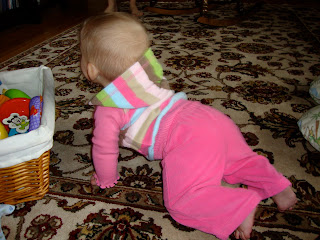 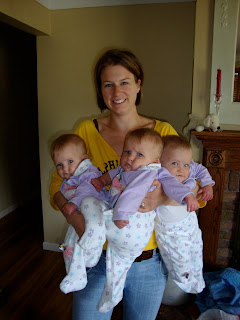 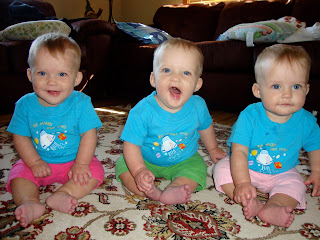 Madeline was sad and started scooting over towards me. I was sure she was aiming for a toy but it turned out she wanted me!! That was a first! 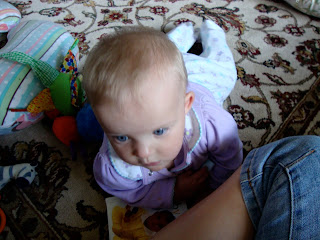 I better get going, as all the girls need a nap. Have a great week- nice and short!
PS. There are so many great summer sales going on right now, but are there moms out there, especially with preemies who may or may not follow a normal growth pattern, who were good at predicting what size their baby(ies) would be after a whole year? Right now our girls are wearing 3-6/ 6 months and I'm guessing they'll do 18 months next summer, but I would hate to load up and then find out they won't fit! Any tips?
Posted by Martha Klopp at 8:14 AM 4 comments: Links to this post