It's great to be back at home after a nice long week in Duluth for Thanksgiving! Can you believe in a week from Thursday my girls will be one year old? Not too much is new here but I thought I'd share some new pics and videos.

Sofia is doing very well. Lately she loves blowing raspberries- either she'll just start doing it randomly or she'll copy one of us doing it. She seems to be really in-tune with us. She'll respond with noises and babbles when we talk to her (more than before). Another thing I've noticed lately is that she is getting pretty clingy to me and can get very "stranger danger". She warms up to new people after a bit but at first she'll cry. I still can't believe she's identical! (Well I can believe it, but it's FUN!)


Madeline is still a busy body and loves to be interactive as well. Sadly, her cough has returned from summer. Ever since her summer cough she's been "rattling" and late last week it got worse and turned into a cough. I brought her to the doctor and he prescribed her antibiotics but it's nothing serious. We just have to be on top of that stuff!

Josephine is a sweetheart and we think she's a "daddy's girl" lately. She lights up when he comes home and tends to gravitate towards him during play time. She is pretty opinionated but can also have the best moods. She's probably the  neatest eater- she doesn't grab at the spoon or blow raspberries during a meal like the others. Ha, next meal she'll prove me wrong- we'll see.

These next couple of weeks will be busy busy! This Saturday we're getting one year professional pictures from the same woman who did them before. The weekend after that we're having their second baptism (the first was in the NICU so we'd like a happier one) and their birthday party. We're going to keep the party small and simple. (And I can't believe Christmas will be here before we know it!) Below are some new pics and a couple of videos. I hope everyone has a great week!

Posted by Martha Klopp at 3:11 PM 2 comments: Links to this post

Happy Thanksgiving from the Klopps!!! 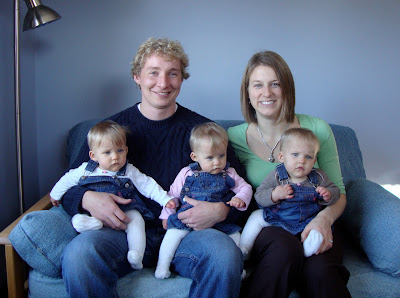 Posted by Martha Klopp at 12:50 PM No comments: Links to this post

......
they are all identical!!! It's exciting news... I am happier to find this out than I thought I'd be! Anyways, that's all for now...the girls and I are going to Duluth tomorrow through Thanksgiving weekend, woohoo!
Posted by Martha Klopp at 5:00 PM 11 comments: Links to this post

Happy Belated Birthday to Grandma! Don't you love this pic below??

We had a great Halloween weekend! Saturday we just hung out as a family (which I just love to do). On Halloween we had a typical day up until mid-day when we put the girls in their costumes. It was pure anger at first! They were rolling around on the floor and had a hard time crawling around in their bulky costumes. Halloween at this age is solely for the parents. They were so cute in their costumes and they started to get more used to them as the day went on.
The first couple of pics are pre-costumes but they all have on their "First Halloween" bibs.

The girls took a little refresher nap before we went out and about. We went to our friends Marie and Adam's house first. All the kids had fun together after our girls got used to the new house. They were all in great moods!

Have a great first week of November- Thanksgiving and Christmas (and of course their birthday) is around the corner- crazy!
Posted by Martha Klopp at 2:03 PM No comments: Links to this post