Closing in on December!

I hope everyone had a great Thanksgiving! We are a little more than a week away from the girls' second birthday!! We're going to have a small party with cake- nothing big. I hear there may be an Elmo theme...

Thanksgiving for us was in Duluth with both of our families. My family had the early one and Dan's the late one. (YES, we ate two dinners in one day, only about 4 hours apart!) Oh, and I earned at least one of my meals because I ran the Gobble Gallop 5k! I didn't run as fast as I was hoping but I improved from my last 5k this past summer. While the girls and I were in Duluth (and Dan was working) we did all kinds of fun things...play time with cousins Dane and Peter, the aquarium, open gym, and the Duluth Children's Museum. Fun times.

I'll give little updates on all the girls...

Sofia has been showing her toddler side a little more lately with lots of defiance. I don't know why but lately she screams bloody murder during baths (physically hurt? or mental?- no idea) and hasn't been eating as well. I just weighed the girls yesterday with the home scale and she was 19 lbs 10.5 oz. Most one year olds are 20 lbs so we still have a peanut. We continue to push high-cal foods but apparently we need to try harder. What will be important will be what the doc says about her weight gain since the 18 mo apt. They don't go in until the 20th so we'll see then.

Madeline is in a DADDY DADDY spurt. When Dan joined us in the Duluth for Thanksgiving, that's when Madeline realized she needed him! Sometimes she screams when he gives her to me!! Hurts my feelings! ;) During the day when he's gone, I'm an adequate substitute, luckily. Madeline's weight yesterday was 22 lbs 9.5 oz. Her 18 month sized pants are getting a little snug on her! I think she inherited my eating gene. Madeline and all of her sisters are talking so much more now. She was the first to ask for water (she just says "wateee wateee"). They will identify things in books and out in the world. One example lately was all three shouting out "cow! cow!" when we passed the milk section since Kemps milk has a cow on the carton. I am so excited for this talking development.


Josephine now weighs 21 lbs 12 oz. Josie has been doing well. She has been the best sleeper lately (Sofia has been getting up a lot lately and Madeline only waking from Sofia.) Josie is also doing really well with eating- still loving her veggies! She recently grew attached to a little Beanie Baby cat from her grandparent's (Klopp) house. It's a little problematic during meal times when she'll throw a fit if I take it away... hmm. She also likes to throw fits when I try to get her dressed. All three girls think they have more say than they really do. I say "Time to take a nap!"Josie nonchalantly shakes her head and says "No... no." (Not even a fit, just saying it matter-of-factly). Oh really??

Here are some more random pics, and some from Thanksgiving. I need to get a pic of the Klopp Thanksgiving still, so hopefully I can put that one up later.

Well, I hope everyone's having a great week. Here comes the busiest time of the year in the Klopp household (I'm sure the busiest for most of you!) We're ready, December!!
Posted by Martha Klopp at 1:39 PM 4 comments: Links to this post

Happy Thanksgiving from the Klopps!

I'm thankful for my healthy girls and my wonderful husband. How about you? 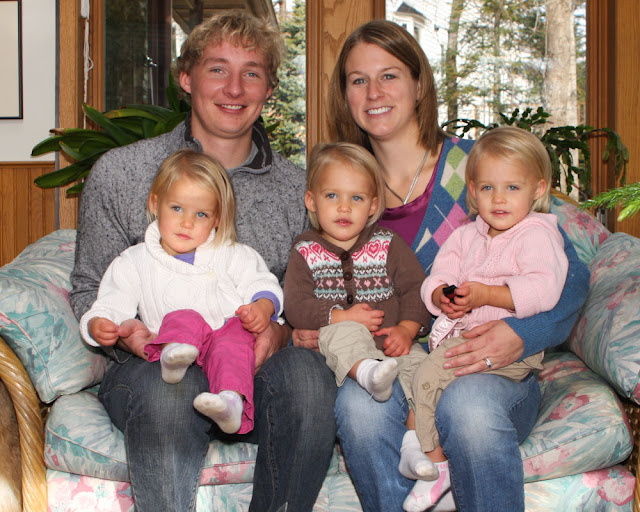 Posted by Martha Klopp at 12:32 PM 3 comments: Links to this post

I hope everyone had a fun Halloween! It was the girls' first time trick-or-treating this year- we just went to 10 or so houses in our neighborhood. It is really funny to think of the whole idea of trick-or-treating through the eyes of a young toddler. They had to be thinking "Really, what are we doing, Mom??" We brought them along in a Choo-choo and then let them walk to the door at each house. They were all distracted during their short walk to the door, looking at garden statues, rocks, and pumpkins. Once they got up to the door they would all yell "hello!" At one house, Josie tried to walk in the house. It was all pretty amusing!  By the last couple houses they were getting tired. Mission completed!

The Sunday before Halloween we had fun carving pumpkins. The girls sat in their high chairs watching and playing with the slimy seeds. At first they didn't touch the goop but then they had fun playing with it.

Here are some costume pics!


If you have a couple minutes, here's a video demonstrating pre-bedtime madness. They are get this hyper most nights!


Have a good rest of the week, everyone! One last pic.