WARNING- long blog post ahead. Not for the busy to read!

My family, along with my mom and dad, just got back today from almost a week out in New England. I swear, if I wasn't living in Minnesota, I could live out there for sure. Just love the area! My mom is from Connecticut/Massachusetts so we have a lot of family out there and of course I used to travel there once a year growing up.
We started out the trip in Glastonbury, Connecticut to see some family. We wanted my grandma to spend some time with the girls since it's hard for her to travel to Minnesota. It was great to see her! It was the second time the girls met her. The first time was when the girls were 8 months old. My uncle David and aunt Jane were gracious hosts- we stayed there two nights. Great hospitality! Thank you so much! We were also so lucky that my cousin Emily was able to spend the weekend with us too, back from NYC. My uncle Carlton and aunt Carol were able to join us for dinner one night too. I missed my other cousins but it's so hard with timing.
One of the fun activities we did was go to a big park in the city of Hartford, CT, which also had an old fashioned, restored carousel. The girls were OK to get on the horses, but once the ride started, they weren't thrilled.


At the end of the weekend, we made our way to Kennebunkport, Maine, where we spent the bulk of our trip. My mom spent some family vacations there when she was growing up. (They stayed at her aunt Effie's house, which is now an art gallery.) I have been there before, but briefly. It is such a quaint, beautiful town. There are no Walmarts or McDonalds in sight (or a Target, for that matter), instead, cute little shops and restaurants (and lots of ice cream shops, much to my happiness in my state). We ate lobster and/or seafood every night. Most of our activity was playing at a couple of different beaches. We also went on a "lobster cruise", which was fun. When I went to Boothbay Harbor, Maine as a kid we went on a whale watching tour, but it's 3 hours- much too long for the girls at their age. Someday!
Overall, the girls seemed to have a lot of fun. We didn't have a designated nap, but they all took one at some point every day, usually in the car. It was refreshing not to have to carve out a couple hours to spend in the hotel in the middle of the day! I think their favorite part of the trip was at the beach- running in the sand, building sand castles, looking for shells and hermit crabs- and avoiding the water. The waves weren't big, but it was no lake! They can even handle Lake Superior, but the ocean is another level.


When we ask about what they did on the trip, they recall:
"Madeline sleep on the beach!"Madeline did take one of the naps on grandpa at the beach. Why is it always she who takes naps at the most random places?

"Seal- seal sick. Seal went to the doctor"At one of the beaches there was a lone seal laying there. A life guard was making sure people were keeping their distance, but he told us it was "probably just resting". OK.... Later, my mom saw animal rehab take it away, so we told the girls that it was going to the doctor. They were concerned!

"Lobster. Ow!!" On the lobster cruise, the guy driving the boat stopped at his lobster trap and pulled up the cage. There was a handful of lobsters and he showed them to us up close. No, the girls did not get pinched, but they saw those claws- ouch!

I think that is all! Have a great Labor Day weekend!
Posted by Martha Klopp at 10:16 PM 1 comment: Links to this post

BOY! And he's healthy! He was measuring 20 weeks exactly (I'll be 20 weeks on Wednesday) and everything on the anatomy scan looked normal. Dan couldn't be there for the ultrasound so I had the tech write it in the envelope. I called Dan after the ultrasound and before the OB routine appointment, and he said "Just open it now!" (We were going to wait and skype tonight.) We are both so excited...it's almost too perfect. I hope everything continues this smoothly. 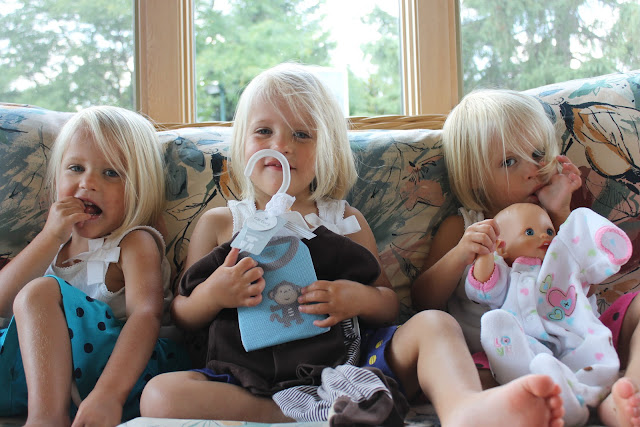 Posted by Martha Klopp at 3:37 PM 5 comments: Links to this post

Well... kinda...mostly. We get accidents here and there and I don't quite trust them out in public (especially the playground where they are too busy to remember). Recently, Dan was in Canada for work for two straight weeks including weekends. The girls were asking to use the potty during/after bath and actually went so I figured they were finally ready! To make everything harder during Dan's trip away, I decided to start right then. I just had them wear shirts or dresses with no bottoms on. If I put undies on they would still go so I had to do the naked thing for awhile. Now they wear undies! They get a mini gummy bear as a reward- I kind of debated whether that was a good idea, but it has helped immensely. Especially if I want them to use the bathroom before we get in the car. It's very exciting to be in the potty training process, but stressful too (mostly out in public). Not sure when it will be 100%, but we'll get there!
I'm 19 weeks today and I feel great. If it was my last pregnancy, I would only have one week left of freedom until bed rest. I can't imagine going on bed rest soon especially with all the chasing I'm doing. Next week I will post another belly picture and compare it to last time. Also, we are finding out on Monday whether the baby is a boy or girl. You have to answer the poll as to what you think it will be!


Posted by Martha Klopp at 8:22 AM 4 comments: Links to this post