End of Summer and New Beginnings

Labor Day weekend came and went. It was fabulous to have another beautiful weekend up north to enjoy that little bit of sunshine left. We got lots of rain but it was mostly at night so that left lots of boat/lake time during the day. The girls had fun tubing- mostly Josie and Madeline. Sofia doesn't take to tubing yet but went with Dan a cu I got in a long run and a hard workout, as I am only a couple weeks away for my next big half marathon. The rest of the weekend, I took it easy- reading by the lake and swimming when I got too hot! The Ahrens were at the cabin too and we got to watch Dane go water skiing for the first time! He popped right up his first try! I guess I shouldn't be surprised, but I was totally impressed.  I love watching all the cousins play together. When they weren't tubing and swimming, they were working on their "spy house" in the woods or jumping in one of the many mud puddles. Good thing there was a lake to wash up in!
Well, yesterday was the girls' first day of Kindergarten. It was a big day for our whole family! First of all, when we think back to when they were first born, the concept of Kindergarten felt foreign and even optimistic. We weren't sure if these babies were going to make it at all. We also thought about James during this big event- thanking him for doing such a great job looking over his sisters. We don't go a day without thinking about him.


Kindergarten for me, marks the beginning of the girls being big kids- and a beginning where we (and family/friends) aren't their only influences in their world. Suddenly, there are their teachers, classmates, and all the other kids on the playground and on the bus! What really made me start crying on the first day was when we were walking to the bus stop and I was holding two of the girls' hands. I thought to myself "how many more years will they want to do this??" It's such a sweet moment to walk holding hands with your kids. After the girls got on the bus, Dan, Will, and I ran back to the car and made it to the school. We barely had enough time to park and run over to the sidewalk to watch them get off the bus! They have a such a short bus ride!

Their first day went well. We had a million questions for them but it was hard to get too much out of them. I wish I could be a fly on the wall and just watch them all day! I do know they got two recesses and saw the gym and did a couple games there. Snack was after an early lunch.... you know, the important things. ;)  Among the new pics, I also added one pic of dan from his first day, and one of me. Who do the girls look like?? 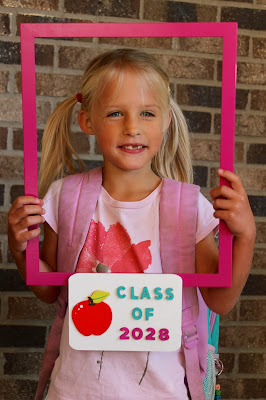 Posted by Martha Klopp at 2:26 PM No comments: Links to this post