If you are a true Minnesotan (especially being from Duluth), you know that official "spring" doesn't mean it will feel like spring. The past several days have been quite chilly, but lately, it has at least been clear and sunny. The sun is strong enough where we are getting good snow meltage even if it's still only 30 degrees. Gradually it's supposed to warm up to  40's (average) this week. Nice! I can't wait until all we have to do to go out is GO OUT! No jackets, hats, mittens, etc.

My dad's birthday is today! Happy Birthday, Grandpa! The girls do NOT do group pictures barely ever anymore. This is the best they could do today.
One development is I'm pretty sure the girls know who is who.  If Sofia is paying attention to me while I ask "where is Josie?" (or Madeline) she points to the right sister! Plus, she points to herself when I ask "where's Sofia?" Or when I say to them, look at so-and-so, they will look to the right sister.

The girls still aren't great with drinking cow's milk. I don't think it's the type of sippy- and it isn't really the taste...they just take some sips and are satisfied. Hmm. They are off and on good eaters besides that.


Dan has been working hard on the basement (and his brother Pete did a lot this weekend too!). The finishing touches are almost done, but the main room is all carpeted and painted. We brought the girls down there to romp around and they had so much fun! Josie especially was beside herself with spunk and energy. She was practicing walking, but wanted to run so badly! She would resort to crawling just because it was faster! What a great way to burn off some energy...

Speaking of the housing situation, we close on our new house on Thursday! We won't be moving in until the end of April, but it'll be nice to know it's official! Ahhhh! This was just a quick update. Nothing too much to report. Have a good week!
Posted by Martha Klopp at 1:58 PM 1 comment: Links to this post

What's new in the Klopp household...

A couple weekends ago, we had a visit from my brother Andy and his wife Aimee, and my brother Ben visited a different day. Fun times! This past weekend Dan's parents stayed with us to help get our house ready to sell. We bought our current house 4 years ago and it's been an ongoing project ever since! I just can't wait until this process is done. Thanks for all the help, Mike and Debbie! Our goal is to finally list our house on the market next weekend.

Sofia is a walking machine! She still copies us and she even covers her eyes to play peek-a-boo. At her 15 month appointment, she was still not on the growth curve for height or weight, but she is 25th percentile for head size! Woo-hoo! The doctor said both Sofia and Josie are "holding their own", which is nicely saying they aren't gaining weight quite as quickly as would be ideal.


Madeline walks everywhere too and even is trying to run. All of the girls understand so much of what we say- more than we even realize. When I was changing Josie's diaper, I said to Madeline "Madeline, pass me a diaper", and she did! What!?! At the doctor's, Madeline wasn't on the growth curve, but was 25th percentile for head just like Sofia. The doctor is impressed with her weight gain and he says she is catching up. He also said they act closer to 15 month girls than 12 month.
Josephine is still unsure about this walking thing. We see her stand up on her own and take about 5 to sometimes 10 steps, but she doesn't want to take it up full-time. She also gets really intimidated if she's up taking steps and she sees a sister walking towards her. She is just a more tentative girl! Josie is right there with understanding and also practices saying more words. At the appointment, Josie of course wasn't on the growth curve but also has a head in the 25th percentile. Maybe we'll have smart girls!

Have a good work week!
Posted by Martha Klopp at 1:35 PM No comments: Links to this post

Josephine Louise came home last year on this date! This is the post marking that happy day. It truly was the best day ever because we finally were done with the NICU. Everyone has a special spot in their heart for Josie because she had that extra month in the hospital.

We had a busy weekend, and I promise I'll put up a good update post tomorrow!!
Posted by Martha Klopp at 8:27 PM No comments: Links to this post

March 9th....the girls' original "due date". Of course, we knew there was no chance on actually getting to their due date- or even February for that matter, but it is an important date to us! The due date tells us what their adjusted age is. So, they are ONE year old, adjusted! Next year we won't even be thinking about the "adjusted" age because they are supposed to be caught up by then.
Tomorrow, the girls go in to their 15 month appointment! (No shots, phew!) We'll see if they make their real age growth curve yet, but I doubt it. We don't have big girls by any means. Luckily, my parents will be able to help me with the appointment. They are in town to pick up my brother Ben from the airport (visiting from Portland).
Now that Sofia, Maddie, and Josie are toddlers, my initial plan was to be done with formula as soon as their stock pile ran out. So.....I confess I went out and bought just one more can ("toddler" formula this time) because I was just not prepared to be done with bottles just yet. It's more sad than I thought it would be to be done with formula and bottles. They just seem to like their routine, but I know it will have to change at some point. My main excuse is that I need to talk to the pediatrician about cow's milk/water/nutrition in general before we're done. Giving up formula along with giving up pumping were two hassles I thought would be so easy to give up but both proved not to be! They aren't babies anymore!
Yesterday, I got a call from the library saying the book I requested was in, so today I brought them all to go pick it up. I really don't take them out too much, and every time I do take them out I'm reminded that it is out of the ordinary to have triplets- and that's putting it lightly. We were stared at by just about everyone. Some pointed, some just gave me sweet smiles, and some commented to me. I haven't experienced any negativity but I hear from other triplet families that they do. Anyways, I am not used to getting stared at for any reason.  To make everything harder, the girls sometimes start bawling when strangers look at them up close. Today, it was Madeline and Sofia. I wonder how the airplane and airport will be in April...
Madeline is walking full time now- she surprised us because Sofia had been ahead but Madeline just got motivated lately. Sofia will be full time walking soon enough, and Josie is walking more each day! All three love to imitate us more than before and they clap and point so much! They are so fun!! OK, picture time (and video to show Madeline's skills).

I'll try to update with their percentile stats tomorrow.  Have a great rest of the week!
Posted by Martha Klopp at 2:52 PM 3 comments: Links to this post

I have to add these videos... anyone out there have/had a baby that does this mode of transportation? All three girls have been doing this for a long time but I haven't posted a video of it yet. Every person who sees it thinks it's funny and hasn't seen it before. Have you? The first video is of Sofia doing it, then Josie is doing it in the second.

I just wrote a full update so scroll down if you haven't read that one yet!!

Our girls are busy, busy TODDLERS. Oh my! They love to see what they can climb on and what non-toys they can discover. Their recent thing to climb on is their music activity table. Who cares if it can play fun music- it's way more fun to sit on! They also love to climb on the fireplace brick and just hang out. It makes me really nervous when the girls are up there.


They had their last RSV shots of the season this past Tuesday. Wow, I'm glad we're done with the monthly terror! I'm so thankful they were able to get them but glad we're done. It's a sign of spring! Knock on wood, the girls really haven't gotten sick this winter but we've been diligent about keeping them away from the public. I miss being out though! Come quickly, summer! 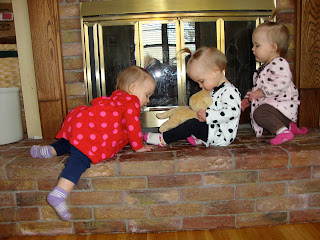 Here are some walking videos. The first one shows Madeline walking (this movie cracks me up) Josie is in the next one and Sofia is the last one.


One big piece of news is that we found a new house to fit our huge family! It's in a suburb of St. Paul and we close March 31! We have the mortgage rate fixed so it feels very real! I'll miss our neighborhood but not the tiny house (really, it wouldn't feel tiny if we had just one baby). Some of the highlights are 4 big bedrooms, a big kitchen, main floor laundry, a sport court (you can play basketball, tennis, etc on it) and hot tub in the backyard, and it's really close to a nice nature preserve and park. We plan to get our current house on the market really soon but we are in the middle of fixing up the basement. Hopefully it won't take too long to sell.

Dan's sister, Lara, and her two boys are here for a couple of days, plus my parents are coming back from Florida so we'll be busy in a good way! Have a great weekend everyone!
Posted by Martha Klopp at 10:38 AM 1 comment: Links to this post