Where do I begin? First, a huge thanks to Dan's parents, Mike and Debbie for inviting chaos to their rented condo! They rented a condo close to the beach in Florida for the month of April so we went for one week. The whole crew was in FL- Mike and Debbie, Lara and Charlie with their boys Peter and Dane, and Pete and his girlfriend, Erin, and US- all five of us! Dan's grandparents Jim and Sue, plus the Purdy family (cousins)- Connie, Dave, Tessa, Jenna, and Jack were also there. Fun group!

On the way out to Florida, we had a really early flight, and we were so nervous and anxious to see how the girls would handle their first airplane ride. We were lucky to fly with Dan's brother and dad to help out. One baby was able to sit on Mike's lap, and the other two with Dan and me. All three girls ended up sleeping for half of the first 2 hour flight and basically all of the following 45 min flight. So far so good....!  We were pleasantly surprised. The girls attracted a lot of attention at the airport and on the plane and people were nice about everything.

So...what'd we do for cribs and highchairs, you ask? WELL, there's a thing called the "Triplet Connection" where people ask each other for advice and I have seen people reaching out for help when traveling. I posted whether there were any families in Pensacola so we could borrow three pack and plays...and guess what! It worked and we picked up three cribs on our way to the condo (not even out of the way, really) to borrow! I love Triplet Connection! For highchairs, we recently got gifts from a family friend, Anita. They are fabric highchairs and they work well! (You have to really supervise because they aren't completely fool-proof.) I included a pic below showing how they work. They are such a great alternative and pack really small! Perfect!

The girls needed a couple of days to adjust to all the new-ness. You could tell they were overtired and overwhelmed. They were scared of the ocean for the first half of the trip and didn't even want to touch the sand at all. A lot of crying went down and I was a little scared it would be a long week. Madeline was the hardest to adjust, Sofia the easiest. It's so funny because that's not always the case. They weren't into the pool at first either! We eased them into it and evenutally they had so much fun with the pool AND beach. It was even more fun to watch them! (They started to like the sand TOO much and started putting handfuls in their mouth. YUCK! We definitely had to stop that new habit).

We went to see the Blue Angels practice- the first attempt the clouds were too low but we saw it the following day. The girls didn't love it, but I did! (They especially didn't love me covering their ears and sitting too long). On that first day we attempted, we went to the Naval museum instead, which was very interesting. The best part, of course, was a little playground they had. The girls went hog-wild! They were running (no, walking really fast!) all over the place! Even though they weren't together and didn't have matching outfits, they still attracted a lot of attention. Everyone was asking about them! 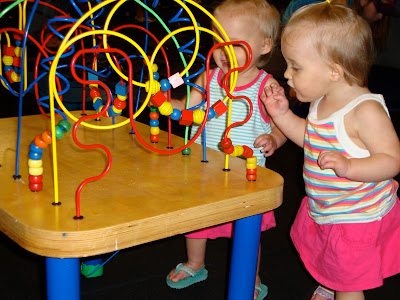 The trip back went alright too. Dan's brother, Pete, held a baby on the flights back home. The problem was when a baby would see me and had to be with me! Plus, the first flight was at 5 pm, a notoriously fussy time of the day. We played musical babies for sure. I felt badly for Pete- not a very relaxing way to travel. Thank you so much again, Pete! Thanks to Charlie too who helped us out until we parted ways in Atlanta. I don't think we could have handled any of that by ourselves! The second flight was better because they slept the whole way (the flight was at bedtime).

All in all, the trip was a success! Tiring, yes, but we had a lot of fun. I have realized that vacations are no longer vacations with young kids, but it was life in better weather! :)  Thanks again, to everyone. Now, we have the countdown to the big move! Our first night in our new house is Saturday. THIS Saturday. Wish us luck! (Luckily it is just a move across town, not the country.)

If you made it through the whole post, good job! Sorry it was so long!

PS. BLOGGER, WORK ON YOUR FORMATTER! It is impossible to work with and this post looks screwed up!
Posted by Martha Klopp at 12:05 PM 3 comments: Links to this post

Stay tuned for plenty of pics! Look at my adorable beach babies!!
\ 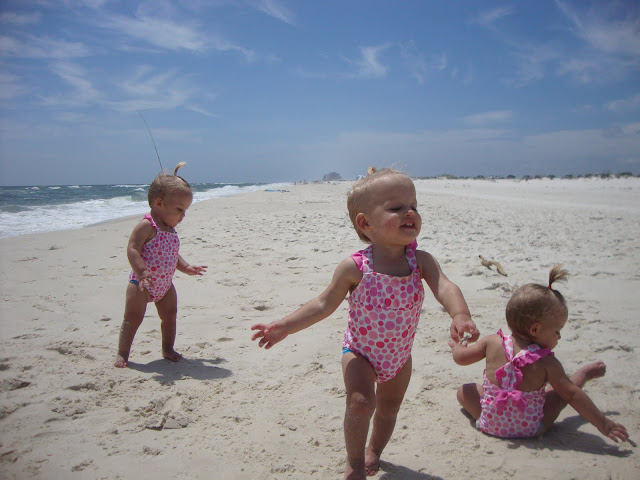 Posted by Martha Klopp at 10:52 AM 3 comments: Links to this post

The closing went smoothly... we move in on the 30th (the owners are renting from us this month until they can move into their new place) but we can start moving our things in right away. The weekend of the 30th will be crazy, though! Hopefully, someone will be moving into our house that same weekend.

I brought the girls to Baby and Me Storytime at the Roseville library. I have been thinking about going for awhile, but they recently had a cold that I didn't want to spread. I was also nervous about how they would act in this new surrounding WHILE missing their morning nap. (Quick side story showing how they can be unpredictable with being scared. In the tub we thought it would be fun to blow some bubbles to show them. They all kinda just looked for a second, then all started bawling. They were so scared of the bubbles! Who would have thought? Plus they take awhile to warm up to strangers.)
Well, it was a hit! The girls weren't scared and had fun playing with toys and other toddlers. Sofia left my side first, followed by Josie. Madeline was pretty much within a couple feet from me up until the end when she finally ventured farther away. The WHOLE circle/story time, Josie was across the circle hanging out with another toddler and mom! I was so surprised! It was so great for ALL of us to get out of the house! I think this will definitely become a regular for us.

Have a good week everyone. We are counting down the days until Florida and the move. Hope time doesn't go by too fast though because we aren't ready for either!!
Posted by Martha Klopp at 9:34 PM 1 comment: Links to this post